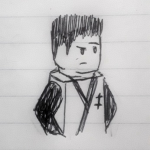 Sketch, Ninja of the Pen

Sketch is a Master of Ink. He is a retired bureaucrat of the Ninjago Fanon Wiki and comes back sometimes to make people straighten up or to do technical work.

From the time he was born, great things were expected of Sketch. When your entire realm is a two-dimensional sheet of paper, and you and your family have power over ink, you kind of have a lot of responsibility.

Around this time, he began to learn about the power of his realm—"The Paper Plane", some called it—itself. The Paper Plane can interface with any other realm through paper. Of course, this means that anything written or drawn on paper in other realms is placed in the Paper Plane. This has been the job of the Masters of Ink for generations: defending natives of the Paper Plane from external, extradimensional threats.

Due to being overpowered, Sketch eventually became bored with his destiny, and began to experiment with how he could manipulate the other realms in return...

Retrieved from "https://ninjago-fanon.fandom.com/wiki/User:Sketch,_Ninja_of_the_Pen?oldid=106410"
Community content is available under CC-BY-SA unless otherwise noted.