Kai is the ninja of Fire. He was chosen to protect the Green Ninja (Lloyd Garmadon) along with the other three Ninja. When his father was killed by Zavok, Kai wanted revenge on Zavok and wanted to make him pay for his dad's death.

Kai was born to two unknown parents. Kai's mother died while giving birth to him. Kai's father and brother took care of him with the help of his brother's girlfriend. Kai was taught the Art of the Blacksmith. Then the enemies of his dad the Kriosos clan were framed by Master Kriosos (really, Zavok) for killing his father.

Kai is very tempestuous, and often leaps into things before he thinks. He would leap into a lake before checking to see if there's fire in it. Really, he hopes there is, because he wants to fight it. But, he is a kind person who cares greatly for his friends. He is a Party Person when not in Fight Mode. 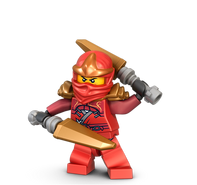 Kai in his ZX suit 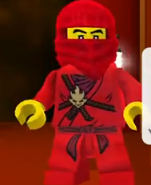 Add a photo to this gallery
Retrieved from "https://ninjago-fanon.fandom.com/wiki/Kai_(Shroob12_Version)?oldid=99148"
Community content is available under CC-BY-SA unless otherwise noted.