Eira is a very small built girl with very light colored skin. She is a nindroid because of her parents. Eira normally wears a light blue sweater with a white snowflake in the center. Her pants are a dark navy blue and loose fit. Unless you are close to her your most likely going to see her walking with her head hanging low. She has light blonde hair that goes down to her shoulder.

Ice- She inherited her elemental powers from her father and likes to use them to make other happy. She secretly fears that she might accidentally hurt someone with her powers.

Form- She barely inherited powers from her mother and can only briefly change forms. Using this power tires her out quickly.

Grace- She acts a lot like her mother in that she prefers being alone (unless with people close to her). She loves he mother and is very close to her

Zane- Eira takes after her father in many ways, she is very close to him and thinks of him as his mentor. She loves when Zane trains her to use her powers and loves when he reads to her.

Knox- Soon after they met, Knox had a huge crush on Eira which she was oblivious to. It took her 3 years to realize it and after spending a lot of time with him they had become great friends. She spent many nights wondering whether she liked him or not until one day when a huge blizzard caught them in the mountains, Eira saved his life and admitted to herself that she liked him. 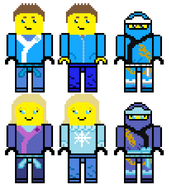 Pixalies by G
Add a photo to this gallery
Retrieved from "https://ninjago-fanon.fandom.com/wiki/Eira?oldid=64615"
Community content is available under CC-BY-SA unless otherwise noted.